Here are just some of the people who are enthusiastic about Ellen Michelson’s campaign! 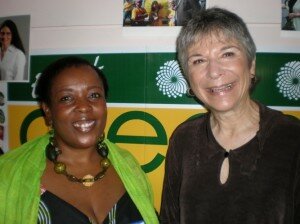 “The Green Party’s success in Canada will be our success in Kenya, too.  The Green Party of Canada includes great women who truly understand and focus on global issues.”
Flora Igoki Terah, candidate for Parliament, 2007, Kenya, and founder, Terah Against Terror

“Ellen, I feel better about the up-coming election just knowing that someone with your evident integrity and seriousness is running. May your success be resounding.”
Martha Baillie, novelist and librarian

“Ellen Michelson is a hard-working Green candidate worth looking at in the next election, if the traditional way is not your way!”
Samuel Getachew, social and political activist and media commentator

“I have known Ellen Michelson for over fifteen years. Her intelligence, passion, and knowledge of the issues will make her a great M.P. for Toronto Centre.”
Andrew Filipiuk, V.P., Investment Advisor, National Bank Financial

“I got to know Ellen when she was the OSSTF Central Technical School representative.  She worked tirelessly to ensure that the staff was well informed about the issues of the day.  She created a climate of respect during difficult times.  She has always been driven by the belief in the importance of building communities.”
Earl Manners, Former President, OSSTF

“From humanitarian work around the world to Toronto Centre, she’s a worker and a fighter. She’d do us proud.”
Barry Wellman, Director, Netlab, University of Toronto

“I’m very excited that Ellen Michelson is representing the Green party in this election. She is hard working and full of energy and dedication. Ellen is the best choice for Toronto Centre and for Canada–we’d be lucky to have her as our Member of Parliament.”
Chris Tindal, former Toronto Centre Green candidate

“Ellen Michelson has seen the scale of the global environmental challenge first-hand. Her extensive overseas experience and educational duties have brought the issues of climate change and poverty into sharp focus.”
L.S. Bourne, Professor, Planning and Geography, University of Toronto