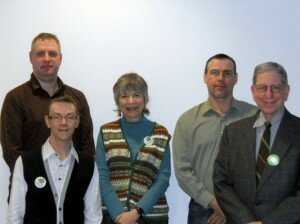 We will be presenting a new constitution for membership approval,
and
electing our executive for the coming year.

1. The Toronto Centre Federal Green Party Association (the “EDA”) is a subsection of the Green Party of Canada (the “Party”), and is bound by the constitution and bylaws of the party. The purpose of the EDA is to:
1.1 Support and promote the principles, objectives and policies of the Party,
and maintain an effective EDA for that purpose.
1.2 Provide organizational and financial support to the Party’s candidate in the
EDA.
1.3 Raise money to support the fundamental purposes of the Party and the
purposes and activities of the EDA.

4. Motions at general meetings shall be passed with a simple majority approval of the members present.

5. The EDA shall hold an annual general meeting (“AGM”) once per calendar year and not more than fifteen months following the previous AGM.

6. Notice of the AGM must be given to all Party members who live in the EDA, a minimum of thirty (30) days before the AGM, by at least one of the following means: email, telephone, Canada Post, hand delivery.

7. A quorum at the AGM shall be the lesser of five (5) percent of the membership or twenty-five members.

8. Notice of amendments to the constitution shall be included in the notice of an AGM, at which the amendments shall be considered. Such amendments may be proposed by any member of at least thirty (30) days’ standing, in writing to the Executive Committee at least sixty (60) days before the AGM.

9. Amendments shall be adopted by a majority of the votes cast at the AGM.

10. The business of the AGM shall include the election of the Executive of the EDA. The Executive shall be the governing body of the EDA until the next AGM.

11. The composition of the Executive shall be constructed as follows:
11.1. The Executive of the EDA, as per Elections Canada regulations, shall be
comprised of:
1.Chief Executive Officer (CEO), and
2. Financial Agent (FA).
11.2. The EDA shall also endeavor to include, as part of the Executive, at least
one of the following:
1. Secretary,
2. Membership Chair,
3. Fundraising Chair,
4. Organizing Chair,
5. Communications Chair.
11.3 As well, up to 4 Members-At-Large may be included.
11.4. The Executive shall not consist of more than eleven members.

13. The Executive, on the approval of two-thirds (2/3) of those present and voting, may remove an Executive member who has missed four (4) consecutive regularly-scheduled meetings of the Executive without reasonable explanation, or whose conduct is judged detrimental to the objectives of the EDA. The removal may only occur at a meeting called for that purpose.

14. In the event of a vacancy on the Executive, the Executive may appoint a
replacement who shall hold office until the position can be filled by election at
the AGM of the EDA.

15. The executive shall appoint an auditor in accordance with Elections Canada
Requirements and the accounts of the EDA shall be audited as required by the
Elections Act.

17. The EDA shall hold a nomination meeting to select a candidate for the Party in the Electoral District in accordance with nomination contest rules provided by the party, if available, and Elections Canada regulations.

18. All approved nomination contestants shall be invited to attend meetings of the Executive.

19. Any member of the Executive, after filing nomination papers to seek the nomination as a candidate in an upcoming federal election or by-election, shall take a leave of absence as an Executive member, and may only resume duties as a voting member once the nomination process has concluded.

20. In the event the membership of an EDA and/or its Executive wish to replace a nominated candidate, a meeting of the membership may be called in accordance with rules provided by the Party, if available.

3 Responses to “Our AGM”